The 29 winners of the 2018 EU Prize for Cultural Heritage / Europa Nostra Awards, Europe’s top honour in the field, were celebrated on June 22 during a high-profile awards ceremony in Berlin, in the presence of the Federal President of Germany Frank-Walter Steinmeier. Maestro Plácido Domingo, President of Europa Nostra, the leading European heritage network, and Tibor Navracsics, European Commissioner for Education, Culture, Youth and Sport, co-hosted the European Heritage Awards Ceremony.

CCA received the Europa Nostra/EU Heritage Awards prize in the category Conservation  for the project of conservation of the apse mosaic of the Transfiguration at Saint Catherine Monastery, Sinai. Father Justin jointed Roberto Nardi on the stage during the ceremony as representative of the Holy Brotherhood of Saint Catherine. The Awards Ceremony was attended by some 1,000 people, ranging from high-level officials from EU Institutions and Member States to leading representatives of heritage organizations from all over Europe. 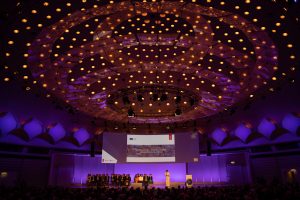 The MCC 2018 course has started

TG2 Mizar: Awarded the restoration in the Sinai Monastery