The treatment of the Pietra Papa mosaic

Practical work is a central aspect of all MCC courses, and much attention has been dedicated to activities in the laboratory.

Across the two modules of MCC Libya 2014, participants undertook a complete conservation intervention on a Roman mosaic.
The so-called “Pietra Papa mosaic” comes from the thermal baths of a villa on Via Portuense in Rome, dated to Adrian’s period (2nd cen. A.D.).
The mosaic, 169 x 269 cm large, is composed by black and white stone tesserae, and it depicts figures of athletes engaged in sport training.
The Museo delle Terme of Roma has kindly made the mosaic available for the MCC Libya 2014 course.

There is no precise reference to the period when the mosaic was detached from the site, moved to Museo delle Terme, and placed on the floor with reinforced cement. It is known that, in order to prevent visitors from walking on the mosaic, in the 1990s the Museum’s Direction had it detached again, and deposited it in the storage, where it had stayed until its recovery and transportation in the CCA’s laboratories. The second detachment intervention was carried out according to the method of the “small pieces”, in sections of small dimensions.
The 31 fragments composing the mosaic were in good conservation conditions, showing evident signs of the previous restoration, such as presence of cement on the back of tesserae and large modifications in the tassellatum.
Participants carried out the whole conservation process in all its phases, from the initial documentation to the mounting on a new support, under the supervision of Roberto Cassio, responsable of the laboratory of mosaic conservation in the Vatican Museums.

The operations undertaken by the participants across the two modules of MCC Libya 2014 were the following ones: 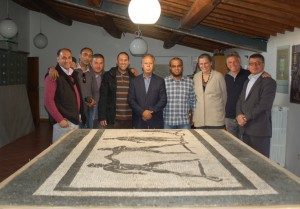 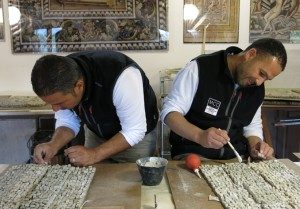 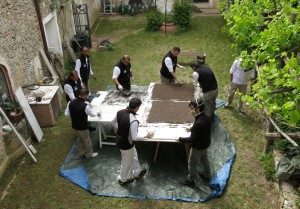 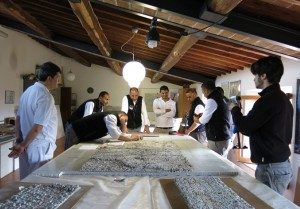 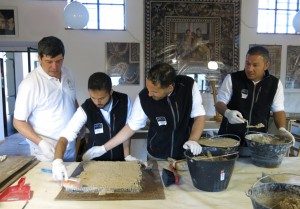 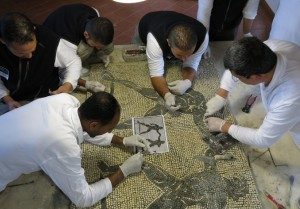