Mosaic Conservation Course (MCC) – Jordan Syria Tunisia 2014 is a project born from a collaboration with the Jordanian Department of Antiquities, the Directorate General of Antiquities and Museums of Syria and the Institut National du Patrimoine of Tunisia. It is part of MOSAIKON, an international initiative aiming to strengthen local capacity for the conservation and management of mosaics in the Mediterranean region. The institutions that take part in the project are the Getty Conservation Institute (GCI), the J. Paul Getty Trust, the International Centre for the Study of the Preservation and Restoration of Cultural Property (ICCROM) and the International Committee for the Conservation of Mosaics (ICCM).

The course took place in Italy, at CCA’s headquarters in Belmonte in Sabina, Rieti, between the 29th of September and the 24th of October 2014.

The General Director of Jordan’s Department of Antiquities, Dr. Monther Jamhawi, visited the course location in Belmonte in Sabina (Rieti, Italy), and chaired the closing ceremony. 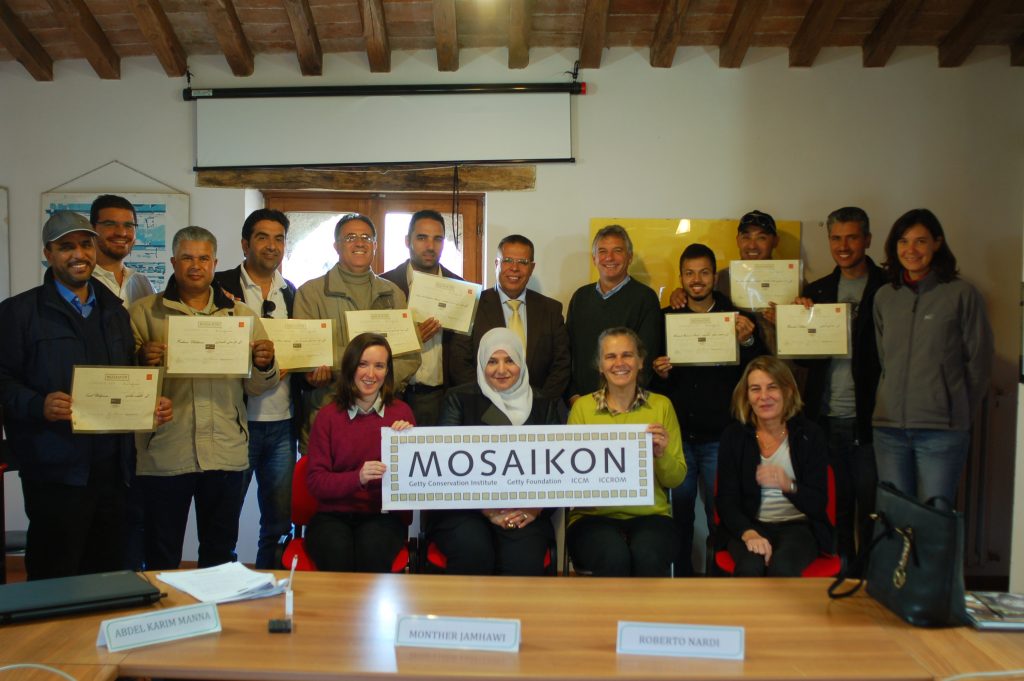 Dr. Monther Jamhaw delivered the course certificate to the participants

On conclusion of the course, participants took part to a meeting of all students from former MOSAIKON – MCC courses. The MCC meeting 2014 took place in Alghero on the 25th of October 2014 and it was an important occasion for sharing experience and professional development.

Following the meeting, all participants attended the 12th Conference of the dell’International Committee for the Conservation of Mosaics (ICCM), that took place in Alghero between the 26th and the 31st of October 2014.

The course combined theoretical lectures with intensive laboratory practice, presentation and discussion of case studies, and study trips to cultural destinations in Italy.