Laboratory practice is a crucial aspect of all MCC courses, and fifty percent of didactic activities is spent undertaking practical conservation on mosaics. This is intended to give the trainees the opportunity to put into practice the theory learnt during lectures, and to gain precious first-hand experience. Within the two modules of MCC Libya 2014 course, participants carried out the conservation of an original Roman mosaic in all its phases, from the initial documentation to mounting on a new support. The work, undertaken in the CCA’s laboratories in Belmonte in Sabina (RI, Italy), was supervised by Roberto Cassio, responsible of the laboratory of mosaic conservation at the Vatican Museums. The mosaic has been kindly given on concession to CCA by the Museo delle Terme of Rome. This fruitful collaboration started in 2011, with the conservation of the Quadraro mosaic undertaken during previous MCC courses.

The so-called “Pietra Papa” mosaic (from the name of the locality where it was discovered) comes from the thermal baths of a Villa on Via Portuense in Rome, dated to Hadrian’s period, first half of the 2nd cen. A.D. The black and white floor mosaic measures 2.68 x 1.69 m, and shows a sportive context: on the left there is a group of two fighters; after them, the figure of a trainer, or referee. On the left, the bottom part of another fighter is preserved, from the waist downwards. There is no precise reference about the period in which the mosaic was moved to Museo delle Terme. According to the Museum’s documentation, at the beginning of the 20thcentury, following a flood of the Tiber, the mosaic faced the risk of destruction, and was therefore detached from the site. Antonio Cassio, mosaicist and former professor of mosaic conservation at ISCR, worked on this mosaic with his brother Fabrizio Cassio in the 1970s, detaching it from the floor of a hall in Museo delle Terme. He remembers that the mosaic had been placed there at the end of the 1950s, by two restorers of the Superintendence of Rome, Mr. Pagliarini and Mr. Carinci. The mosaic was to be removed because of the damage caused by visitors walking on it. It was deposited in the museum storage, where it stayed until its recovery and transportation to the CCA’s laboratories.

The Pietra Papa mosaic was chosen for MCC Libya 2014 because of some of its characteristics, which made it an appropriate case study. Its limited dimensions allowed participants to complete the work within the given timeframe, while the presence of previous interventions, its condition and its technology were able to give a representative range of conservation issues. The second detachment intervention, in the 1970s, was carried out by Antonio Cassio according to the method of the “small pieces”, in 31 sections of small dimensions. 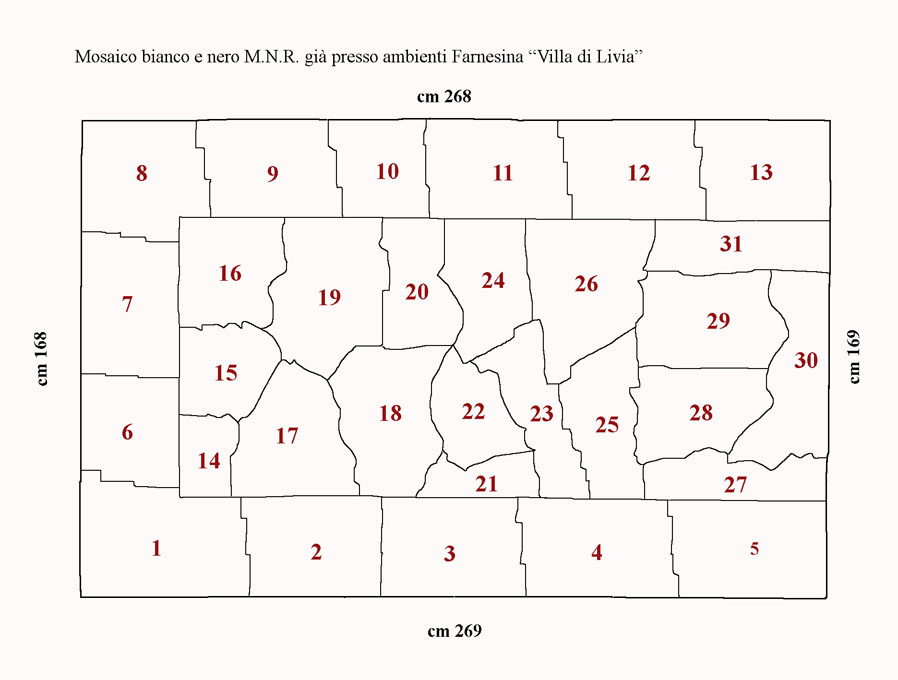 The fragments composing the mosaic were in good conservation conditions, but showed evident signs of previous restorations, such as presence of cement on the reverse side of tesserae and large modifications in the tassellatum. MCC Libya participants carried out all the necessary operations for mounting the mosaic fragments on a new support. 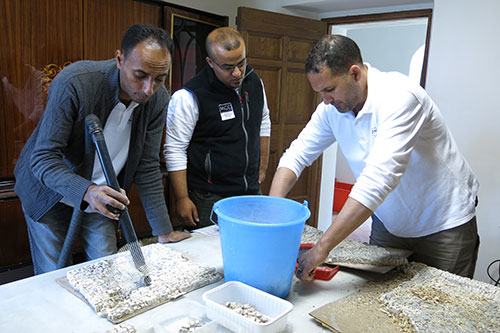 Preliminary cleaning of incoherent deposits from the reverse side of the fragments. 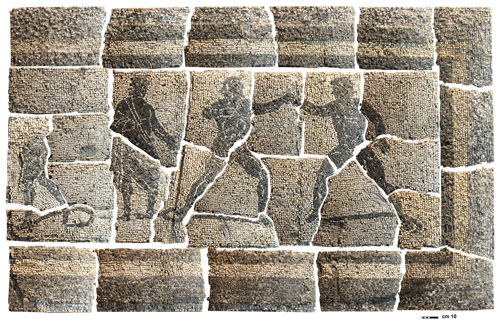 Preliminary documentation: single fragments were photographically documented on the reverse side, the images acquired were digitally elaborated using Photoshop, and reassembled to compose the whole mosaic. 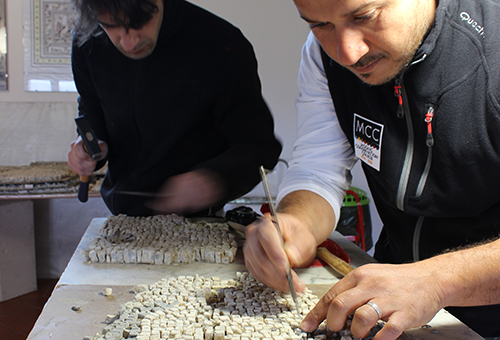 Cleaning of the reverse side of the tesserae: cement residues from previous restorations and remnants of original mortar were removed mechanically, using scalpels and chisels. 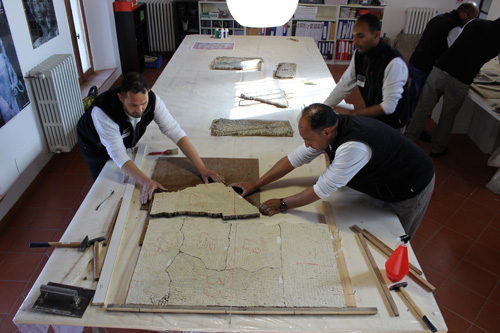 Positioning on clay: individual mosaic sections were reassembled by applying them on a clay layer. The fragments on clay were placed next to each other, front up, to recompose the whole mosaic. Removal of facing and cleaning: the facing used for detachment was carefully removed, by poulticing with hot water that allowed the adhesive used in the past to become soluble. Adhesive residues were removed from the surface of tesserae using water, repeated brushing and scalpels. 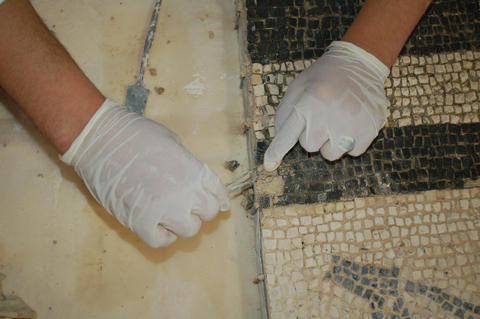 Integration of small lacunae: lacunae in the tassellatum up to 5 tesserae wide were integrated with retrieved original tesserae. 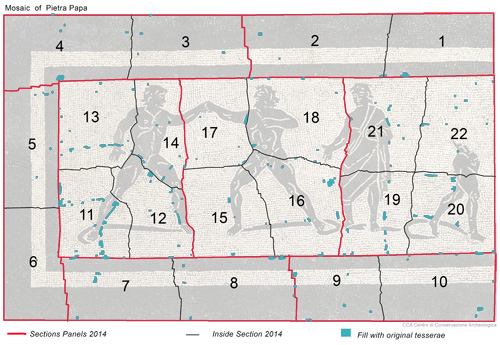 Planning of new cuts: a new subdivision of the mosaic in sections was studied, and 8 new sections were decided, each of them composed by several fragments. Following the mosaic pattern, the aim was to achieve the highest possible blending between the final panels. Once placed next to each other, these 8 panels recompose the whole mosaic. 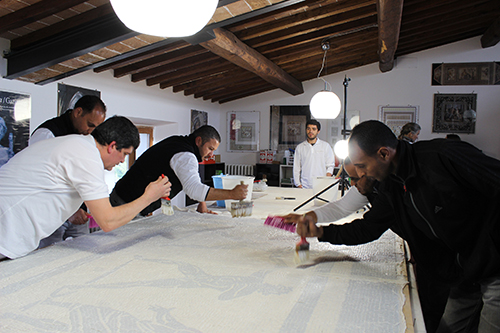 Facing and removal of clay: mosaic fragments were faced again with cotton gauze and flour glue in emulsion with acrylic resin. New cutting lines were drawn and the mosaic cut in sections. Following this, fragments were turned upside-down and every clay residue was removed from the reverse side. 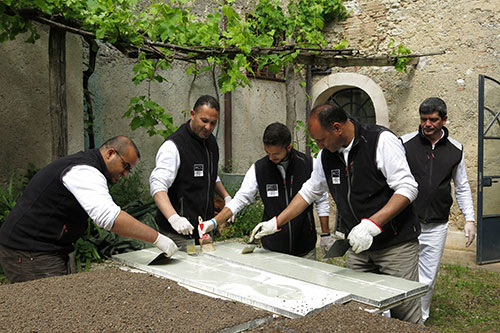 Preparation of a new support: ready-made aluminium honeycomb panels covered with fiberglass (Aerolam) were used. Several panels were joined with fiberglass rods and Araldite epoxy resin to compose a single panel as large as the mosaic. The shape of the 8 sections were drawn on the Aerolam panels, and cut out of it. The sections were prepared with granulated volcanic lapilli and epoxy resin, to create a grip on the surface. 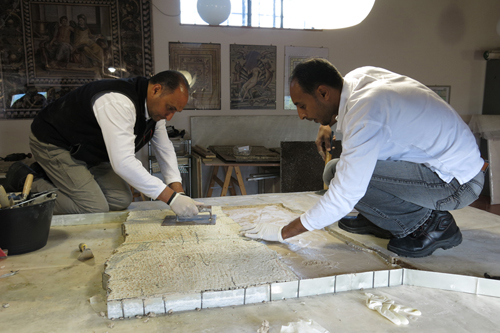 Application on the new support: mosaic fragments were applied on the Aerolam panels with a mortar based on hydraulic lime, lime putty and aggregates of different grain sizes. 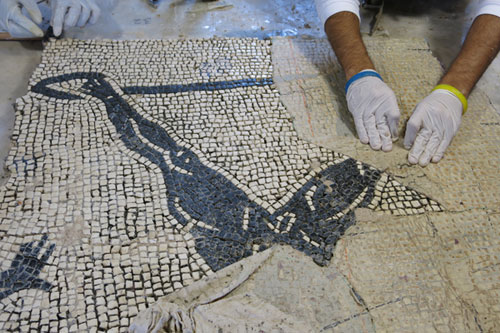 Removal of facing: after the initial curing of the mortar, the facing was removed and the correct setting of the tassellatum checked, making adjustments and/or integrations where necessary.

All the information visible on the reverse side of tesserae (integrations with new tesserae; lacunae; previous cuts) has been graphically recorded on the reassembled image. The whole restoration intervention has been documented in a similar way.

And this is the final result! 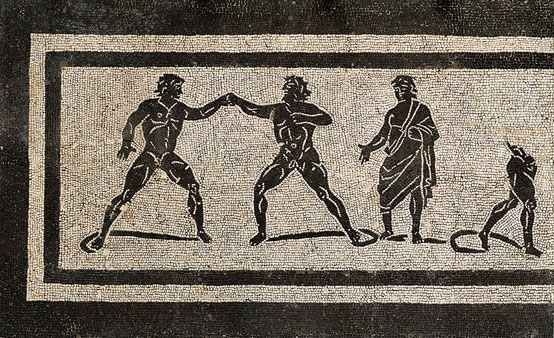 Restoration work on the mosaics of the Umayyad Mosque, Damascus

A discussion about the current situation of mosaics in Libya: issues, threats and possible solutions for the future.