On Wednesday the 22nd of April 2015, at 15:00, Roberto Nardi gave the lecture “The Roman city of Zeugma (Turkey) conservation project”.

Roberto Nardi presented the outcomes of the conservation project of the Roman city of Zeugma, Turkey. Zeugma archaeological site was in the international spotlight following a cry for attention by the New York Times, in 2000. Zeugma’s invaluable archaeological heritage was threatened by the building of a dam on the Euphrates River, which was going to flood two thirds of the ancient Roman city within a few months. Thanks to generous funding by the Packard Humanities Institute (PHI) a conservation and excavation emergency plan was implemented. For six months CCA conservators were fighting against time and the rising water level, managing to remove from the site 4000 finds, 160 square meters of surfaces, and to protect 8700 square meters of archaeological structures before the flood. Prof. Nardi also presented the conservation project carried out by CCA in the years following the flood. It involved finds removed from site and 850 square meters of detached polychrome mosaics, now on display in the new Gaziantep Museum.

The conference took place at the Archaeological Museum of Macedonia, Dimitar Vlahov b.b., Skopje. The event is part of a cycle of conferences for the Balkan Heritage Foundation between the 20th and the 22nd of April 2015, in Sofia, Plovdiv and Skopje.

Balkan Heritage Foundation is a Bulgarian is a public, non-profit, non-governmental organization, whose mission is to support the protection, conservation, management and promotion of cultural and historical (both tangible and intangible) heritage of Southeastern Europe. 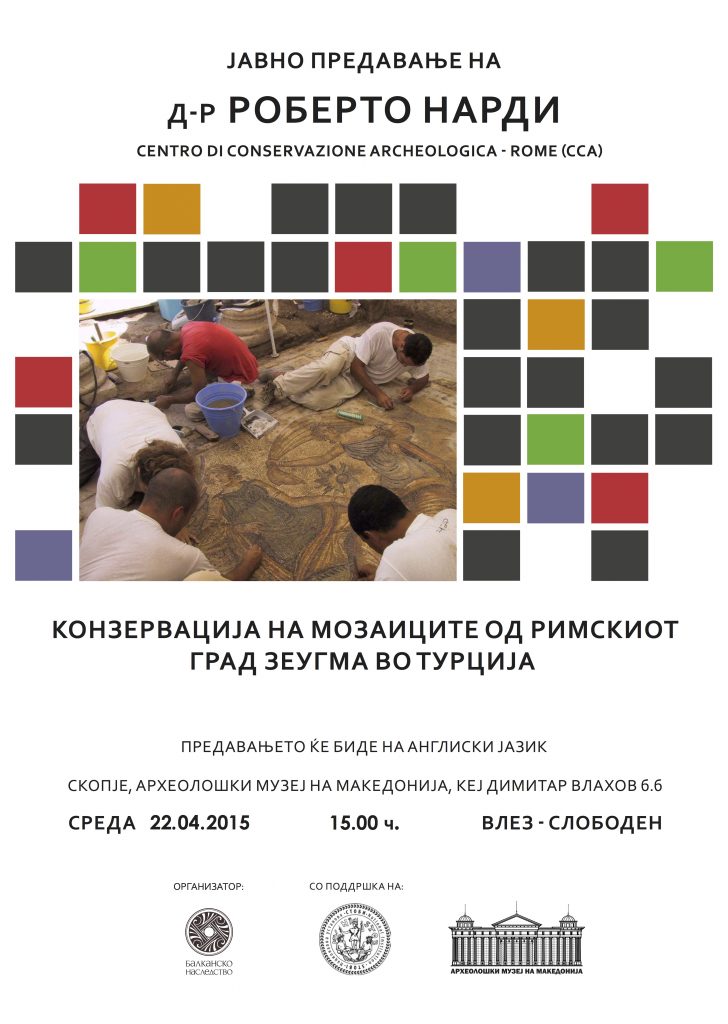 Conservation and the public

Monastery of Saint Catherine in Sinai: The conservation of the mosaic of the Transfiguration