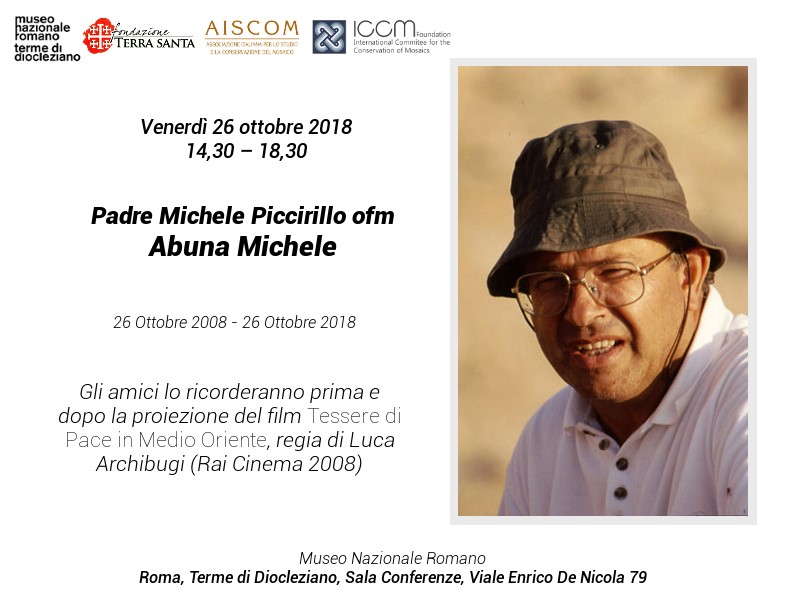 On Wednesday October 26th 2018 the Museo Nazionale Romano, in collaboration with Terra Santa Foundation, ICCM Foundation and Aiscom organized a conference to honor Father Michele Piccirillo, for the tenth anniversary of his death: Abuna Michele was a Franciscan friar of the Custody of the Holy Land and one of the greatest archaeologists of the history of the Christian Middle East who made sacred art, and in particular mosaics, a means of evangelization and peace. Friends and colleagues were invited to honoring his memory, and his spiritual, human and scientific legacy. Roberto Nardi as President of ICCM Foundation, where Father Piccirillo was an active member, gave a conference on the Conservation of the mosaic of the Transfiguration in the Monastery of Saint Catherine, Sinai.

The commemoration of the Franciscan archaeologist included the presentations of the archaeologists Rita Paris, and Maria Teresa di Sarcina (MIBACT); of the conservator specialized on ancient mosaics Alessandro Lugari (Soprintendenza Speciale per il Colosseo, il Museo Nazionale Romano e l’Area Archeologica di Roma). During the celebration, the movie retracing the salient phases of thirty years of excavations and restoration dedicated to the mosaic throughout the Middle East made by Father Piccirillo titled “Tessere di Pace in Medio Oriente” by Luca Archibugi (RAI Cinema 2008), was projected.